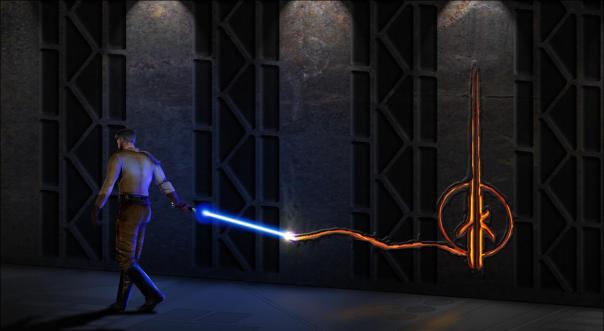 Over the last couple of years I’ve been immersed in the prequel stylings of “The Force Unleashed” parts 1 & 2. Which, to be honest I have found to be entertaining but at the same time the challenge diminishes and the second outing seemed all too short in comparison to its predecessor. Having said that , courtesy of Steam, during the Christmas break I was fortunate enough to grab all 5 of Lucasarts Jedi Knight series (releases spanning from 1995-2003); for those of you unfamiliar with these little gems they are as follows:

Jedi Knight: Mysteries of The Sith

***WARNING – CONTAINS SPOILERS (if you’re unfortunate enough not to have played this awesome series yet!)***

The Dark Forces games to me are kind of like the “Rosencratz & Guildenstern are Dead” of the Star Wars Universe, it fills in a couple of blanks for the original trilogy and even a little beyond. As the protagonist Kyle Katarn, your first mission in the game is to steal the plans of the original Death Star, which of course, in theory, starts the chain reaction which is episodes IV-VI. As an FPS (first person shooter) it’s very cool, right in the running coming after “Doom II” and before “Quake”. The general premise of the game is that a year later the Rebel Alliance hires Katarn again, this time to investigate an assault on one of their bases by a new type of Imperial soldier soon exposed as the Dark Trooper. This has always been one of my favorites, granted it’s very dated but in my eyes it can be seen as nothing more than a classic. And without doubt one of Lucasarts most successful games, seeing as the game went on to sell 952,000 copies over its first five years of release, it became the eleventh highest selling game from 1993 to 1999.

After Dark Forces Star Wars fans were left gagging for more for a further two years! But when it finally happened we were forever thankful for what became Dark Forces 2: Jedi Knight! When I first played it I couldn’t believe my luck, not only had I the opportunity to play in the Star Wars universe as a character, but to be able to play a Jedi seemed just a stroke of genius! A major plus for the game was that they filmed live action cut-scenes to give the effect of a new film within this great game. General plot for this episode in Katarns saga is set one year after the events in Return of the Jedi. The player controls Kyle Katarn, who made his first appearance as a mercenary in Dark Forces. Katarn meets with a droid named 8t88 who tells Katarn that his father, Morgan Katarn, was killed by a Dark Jedi named Jerec. Kyle retrieves a disk from the droid that can only be read by a droid belonging to Morgan at his home. The disk’s message, coupled with the droid giving Kyle a lightsaber, compel Kyle to undertake a journey to confront his father’s murderers and to discover his own latent Force abilities. While on this journey, Kyle learns that seven Dark Jedi are intent on finding the Valley of the Jedi, a focal point for Jedi power and a Jedi burial ground. Katarn retrieves the Valley’s location and travels with Rebel agent Jan Ors to Ruusan, the planet on which the Valley is located. Jerec captures Ors and offers Katarn the decision to execute her or die. This decision Katarn makes depends on the player’s actions within the game to this point. If Katarn kills Ors he turns to the dark side, but if he lets her live then he goes on the light path. With both paths, Katarn has a final confrontation with Jerec in the Valley of the Jedi’s core. If the player chose the dark path, the game ends with Katarn becoming emperor; if the player chose the light side, the game concludes with Katarn being reunited with Ors and carving a monument to his dead father. This is the absolute favorite for me! I was 14 when this game first came out, one thing I got swept up in was not only the cinematic adventure of the game, but the multi-player facet of the game. This took off in a huge way, and was my first time playing a game online with other people. The original content itself was awesome enough, but then people started creating further avatars, MODS and levels. I swear to God there was a Jedi Nightclub level which was created which when you hit the dance floor “Breathe” by The Prodigy would be on a loop, it was genius! For a good two years my friend Lee and I used to play JK online with a clan named LDB (Lord of Despot Boyz) and we would meet online every Sunday evening to play with other clans, it was always so much fun. And sooo long before the days of ‘pwning noobs’!

A year later an expansion disc was released entitled “Mysteries of The Sith”, set five years after JK, the story begins with Kyle Katarn training Mara Jade as a Jedi. For those who don’t know, Mara Jade first appeared in the Timothy Zahn novel “Heir to The Empire” (first book of the Thrawn Trilogy). You’re in control of Kyle for the first couple of levels, after that he goes off to investigate a Sith Temple on a planet named Dromund Kaas and you then run the rest of the games challenges as Mara. She then completes her missions for the New Republic, but hears that Katarn has broken contact. She heads to Dromund Kaas to try and find out what has happened to him. At the temple she discovers that Katarn has been corrupted by the power of the dark side located within the temple. Failing to convince him to turn back, Mara battles him in a lightsaber duel which finally turns him away from the dark path, as she disengages her lightsaber and Kyle finds he cannot go through with killing her. Unlike JK, MOTS has only one direction for the story to go, as opposed to the 50/50 outcome of JK depending on your actions in the game. I never minded this fact, it just meant that there was a simpler level of playability. Also, the AI was seen as a slight improvement from JK; whenever an enemy had a weapon taken away via ‘force pull’ they would just wander around, in MOTS they would then just punch you instead which would mean a better level of defense on your part. One of the high points of this pack was 20 new creatures from the SW universe including a Rancor you must defeat! A pretty decent addition to the saga, not necessarily my favorite but always got time to play it.

After years of Katarns exploits in the stories, it would seem like Lucasarts were running low on platforms for him so a year later in 2003 they moved onto the next generation through “Jedi Academy”. This is the only game in the series I have very little experience playing. I must admit I really liked the ability to create your own character (gender, appearance and also lightsaber design and blade colour) for the purpose of the storyline (making use of the same Quake III Team Arena engine used in Jedi Outcast), gives a bit more involved I suppose. You take the role of Jaden Korr, new student arriving on Yavin IV to join Luke Skywalkers Jedi Academy, you are then assigned as apprentice to Kyle Katarn, you are then sent on various missions as part of your training. As the game progresses the main plot unravels as Jaden encounters the ‘Disciples of Ragnos’, a Sith cult who are stealing Force energy from various locations across the galaxy. The player learns that the cult is led by Tavion, the former apprentice of Kyle’s nemesis Desann from Jedi Outcast. Tavion has recovered the Scepter of Ragnos, which has the power to drain and release Force energy. She plans to restore the Sith to power by using the stolen Force energy to resurrect an ancient Sith Lord, Marka Ragnos. What I do like about this game is that they went back to the popular idea of the light side/dark side choice which dictates the ending of the game depending on the players decision; After learning that Rosh has betrayed the Jedi and joined Tavion, the player can choose either killing him and turning to the dark side or letting him live thus staying on the light side. If the player follows the dark side, Jaden kills Rosh but refuses to join the Sith or help resurrect Marka Ragnos. Jaden kills Tavion to steal the power of the Scepter of Ragnos and, after defeating Kyle in combat, embarks on a campaign of conquest. Kyle, who is found to have survived the duel with Jaden by Luke Skywalker, laments losing both Rosh and Jaden and vows to hunt Jaden down. Luke, wishing Kyle good luck, notes that though Jaden has turned to the dark side, there is always hope and Jaden is not beneath redemption. On the light side, Kyle and Jaden rescue Rosh. Jaden goes to the Tomb of Ragnos to confront Tavion. After besting her in a fight, her body is possessed by Ragnos’ ghost. Jaden defeats Ragnos and destroys the Scepter, banishing Ragnos’ spirit back into its tomb after defeating it. Good fun to play but I guess it jars me a bit being the only game with a different character solely at its base, but the gameplay is as fun as it ever has been!

Bottom line is this saga began at a time when games were games. A time when strategy guides were completely absurd unless the were given to you by a sponsored magazine or somebody would publish a very forgotten art form…CHEAT CODES! What the hell ever happened to them?…So much fun! The greatest cheat code I ever encountered was when I started playing Jedi Outcast, there was a code that meant when you struck an enemy with a lightsaber it actually struck off whatever part of the body you hit (God bless the Quake III Engine!). Granted this sounds a bit disturbing, but any Fanboy worth his salt wouldn’t have it any other way! Playing these games have instigated a great feeling of nostalgia for me. I dream of a day that old flight sims from Lucasarts like X-Wing, Tie-Fighter and X-Wing Alliance will be added to Steam just as the JK Saga was. That would be such an awesome addition! Since the early 90’s the development of Lucasarts has move forward enough to give us titles such as the “Force Unleashed” series, and soon the Star Wars game for Xbox Kinect being released later this year. However, my heart will always lay with this series which added another great dynamic to Lucas’ already flawless universe.

Posted on February 26, 2011, in Games. Bookmark the permalink. Leave a comment.

This site uses Akismet to reduce spam. Learn how your comment data is processed.